Using ITHYF in the classroom

Teachers from all over the globe have used Is This How You Feel? as a resource to engage everyone from primary and secondary students through to university students. They have addressed climate change across a broad range of subject areas and through a number of different teaching styles and techniques.

Now the team at Is This How You Feel? want to ask another question:

Teachers, how could you use this website in the classroom?

Take whatever you want from the website, concepts, approaches, the letters themselves. Test it out in the classroom and let us know how it goes.

We want to showcase how easily climate change can be addressed in the classroom, and encourage a broader discussion around the topic so as to inspire and empower the next generation to engage with the issue.

Lisa first found ITHYF when feeling despondent about climate change. She knew she wanted to involve her students but wasn't sure how. After much consideration she settled on a letter writing campaign. Students used the ITHYF letters as templates and inspiration for their own musings. To date, over 400 letters have been written by students, many have been shared online through the schools Facebook page and via Twitter.

"It has been wonderful to read students' points of view on an issue which has been and will be such a large part of their life. We are currently reading through all the letters and working out how we are going to manage uploading such a large number...

..It is important to give the individuals that will be most affected a voice and to help them realise that it is within their power to act and make a different in the face of seemingly insurmountable odds and that by acting they will also positively contribute to their own well-being."

​Students cover climate change both directly and indirectly at various parts of the curriculum in Hong Kong, but the schools letter writing campaign was started and overseen by the extra-curricular Environmental Action Group which is active throughout the school and undertakes many different initiatives throughout the school year. Every form group has an environmental rep who then feeds info and content back to the main group.

​The students responded in a very positive manner and it is evident from their letters that they took time to research the topic and that they were able to present reasoned arguments in support of action.
This helped them to look at how people felt about climate change, they then looked at twitter and some recent letters that had been submitted to @ITHYF_letters. Higher ability students were also shown the following video https://www.youtube.com/watch?v=APVAAE3b_ws. They discussed how they felt about climate change and the idea of writing our own letters was introduced.

The students used lined paper to write their letters but the teacher had a typed template for students who were less able  (see below). The students wrote about how they felt and why they felt that way. They were able to bring in knowledge they had gained in the previous lessons. Some of the students also decorated their letters and the teacher collected them in to read and judged the best ones to be posted on Twitter (@KeelingKD) and Instagram (@kingdowngeogrpahy).
The students were enthusiastic and able to articulate their responses well, many of them were happy to read their letters to the rest of the class. The activity showed that students had understood the concept of climate change and really wanted to do something to reduce the future impacts. 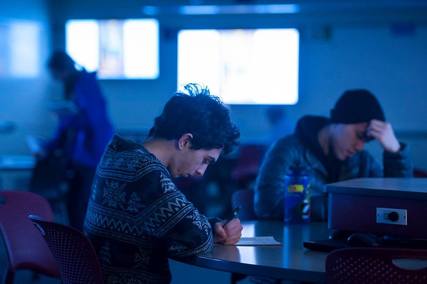 Madeleine and her team work at the University of Massachusetts Amherst. In the fall of 2015 they initiated an experimental incubator programme entitled Talking Truth: Finding Your Voice Around the Climate Crisis with the goal of supporting and building on the understanding of climate disruption. They explore options for taking action while connecting participants with this weighty global challenge we all face. ​
Their experiential workshops employ storytelling, discussions and mindfulness exercises. The reflective writing exercise has been offered many times
Participants enter a dimly lit room with background tonal music or the sound of ocean waves. They watch a short video loop of CO2 levels rising from 800,000 years ago until the present. After a few minutes, the images change to shots of the natural environment. This juxtaposition highlights the vulnerability of our ecosystems and creates a sombre and thoughtful tone.

Participants are then asked to write a response to the question, “How do you feel about climate change?”  At the top of the page participants write their name, age and university association (though anonymity is fine too). This approach to engaging with climate change has been picked up in other areas of the college too.  Some professors have asked students to write responses during class, and in spring 2017 Madeleine and her team set up a table at the Amherst Sustainability Festival to collect responses from community members).

Artifacts of the reflective writing exercise are housed in the University Archives as a "time capsule" documenting the campus community's personal responses to climate disruption.

They have collected  about a thousand writing samples (and some drawings) with future plans for sorting, coding, audio- or video-recording, and performing live readings of the work on campus and in the community. 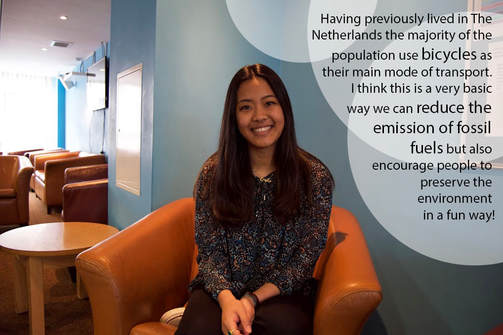 Kiran was the Sustainability Coordinator at The University of Sheffield, where she worked on developing environmental behaviour change initiatives and communicating them within the University. His latest effort Voices of the Climate Crisis is a photo project putting a familiar face to the realities of climate change, where members of the University of Sheffield community share their stories of climate change, and offer their solutions. 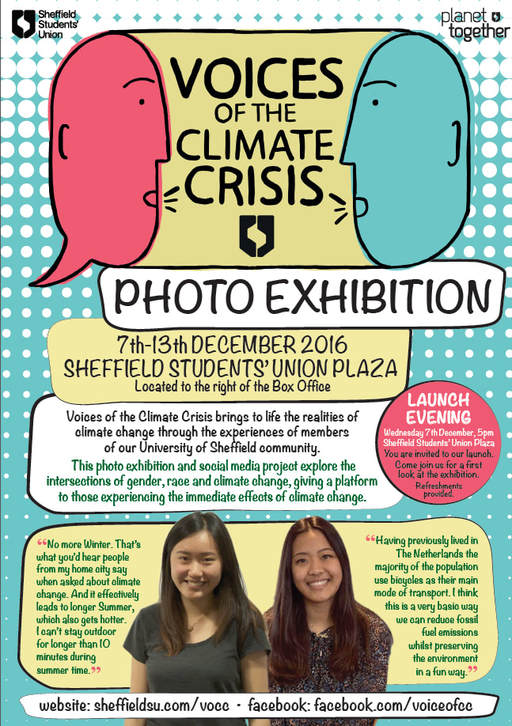 The project was carried out by a permanent staff members and a student casual staff member. They asked for thoughts on climate change from a number of "familiar faces" of the University of Sheffield community. This included Student Officers (the student leaders of the organisation) and international students from communities being more directly affected.

Quotes from each individual were exhibited alongside their photos.

​According to their website Voices of the Climate Crisis "uses stories of people facing the realities of the climate crisis and offers their solutions. We explore the intersections of gender, race and climate, recognising that women and people of colour in the Global South will face the impacts of climate change disproportionately."

The students involved in being interviewed responded very thoughtfully and passionately, and reported that they were glad to be given the chance to reflect on this issue, scary though it is. Seeing their faces and thoughts alongside many others from the organisation made them feel less alone. Those who attended the exhibition engaged very constructively and gave the organisers positive feedback.